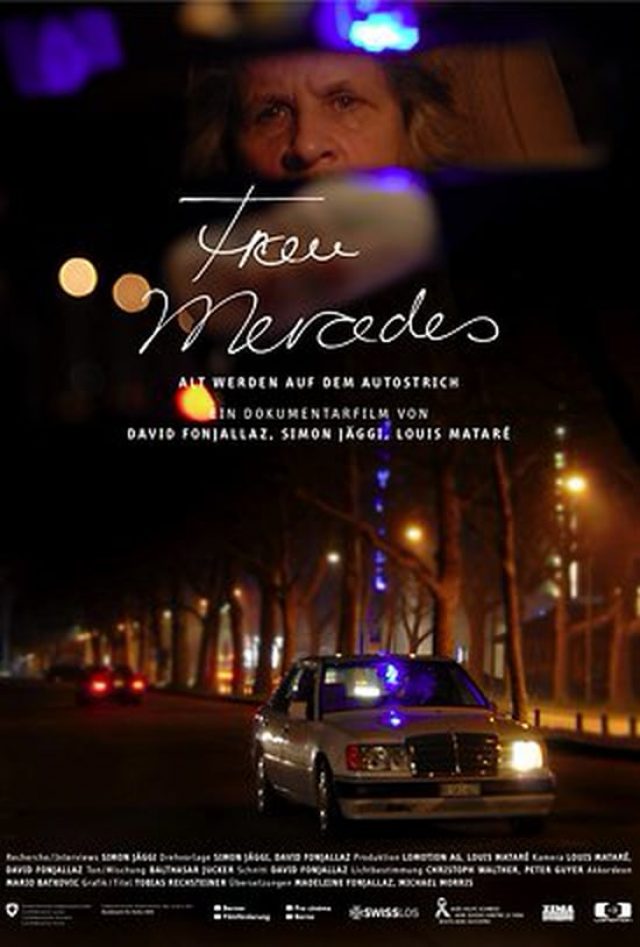 In Bern, Sylvia Leiser has been working for 35 years in her car as a prostitute.  She is known as „Mrs Mercedes“, her car and working place being a Mercedes. She has been directly confronted to the mutation which took place in the underworld: Brothels have been rendered legal with the paradoxical consequence that the business doesn’t submit to any more laws. Prostitution is now socially acknowledged but at the same time has lost it’s glamour, and the profits are no longer what they used to be.

The number of customers is always the same, yet in Bern the number of women working in the underworld has increased tenfold. Today, Mrs Mercedes earns in one month what she used to earn in one day.

The documentary „Lady Mercedes“ is a portrait of the prostitute Sylvia Leiser. The film accompanies her to the part of the town where she works in Bern. There, she offers her services every evening of every week under the name of Mrs Mercedes.

The film shows her also in her flat in Biel, where she is known as Mrs Leiser and lives modestly and rather lonely in an unassuming block of appartments. By interviewing her, by meeting with people of the underworld and acquaintances related to her private life, we get the opportunity of approaching the privacy of a prostitute, of understanding the meaning of daily and normal life for someone who lives in rather peculiar circumstances at the borders of society.

Car prostitution is a remain of old days, coming now to an end. Only seven women wait for customers – the youngest is 55 and the oldest 74. They still work according to ancient rules which have now fallen into disuse. „Women of another stamp“ as the police-constable says. Friendship does not exist in the world of prostitution, however they keep an eye on each other.

The film describes the basic conflict between growing old and working as a prostitute. Sylvia is now 60 and doesn’t make big money as it used to be long ago, when she would make a great show. With a touch of melancholy, Mrs Mercedes recalls the golden years, the age of mink coats, of american sport cars and of the illusion that this good time would last for ever.

Today she lives in modest pecuniary circumstances, she might have become owner of houses, she says, but she prefered to take it easy.

Time has left traces and a few wounds, Sylvia has built a wall around her: „perfect for the job but an obstacle in private life“, as Martha Wigger, a consultant for the advising center Xenia, ascertains.
An intimate and subtle portrait about ageing as a prostitute, a documentary about a vanishing chapter of habits in Switzerland.